what to see in naples

Based on the article written by Dario Marchini (Runner’s World Italia), Photo credit to Pierluigi Benini

Napule is a thousand cultures, Napule is a thousand fears … Napule is a bitter sun, Napule is „è addore è mare“. Naples is the warm yellow sun that seems to wake up the city, the immense blue of the sea that caresses Vesuvius, exalting its inimitable beauty, the dull gray of the buildings huddled together. Wide and bright streets that alternate with the narrow dark alleys, accompanied by the insistent shouts of street vendors. Naples is full of emotions, of contradictions. Naples is the scent of saltiness driven by the wind that blends with that of babà, sfogliatelle, zeppole and fried pizza. Naples is the solitude of old doors of narrow churches in the shadow of two balcony wings and hanging clothes. Naples is the contagious heat of its people that makes you feel at home and the incessant darting of scooters that touch your arms. Naples is a friend’s greeting to a stranger, a coffee offered to which you cannot say no. And Naples is racing, a quick, deep, different taste of its soul. It was enough to lower oneself into its arms, know its warmth and understand its habits to learn to love it. Go upwind on the Mergellina seafront, squeezed between the colors of the buildings that overlook the gulf, going as far as Castel dell’Ovo. Immerse yourself after dawn among the frantic alleys of Spaccanapoli and the Spanish District while the city wakes up still numb from the cold of the night. Enjoy its art among the nativity scenes of San Gregorio Armeno and monuments hidden at every corner. Go up the avenues that climb the hills to enjoy the view of the Vesuvius and go down again towards Piazza del Plebiscito, passing by the Maschio Angioino and Palazzo Reale. „Napule è na’ camminata inte viche miezo all’ato – Pino Daniele sang – Napule è tutto nu suonno e a sape tutto o’ munnoù”. 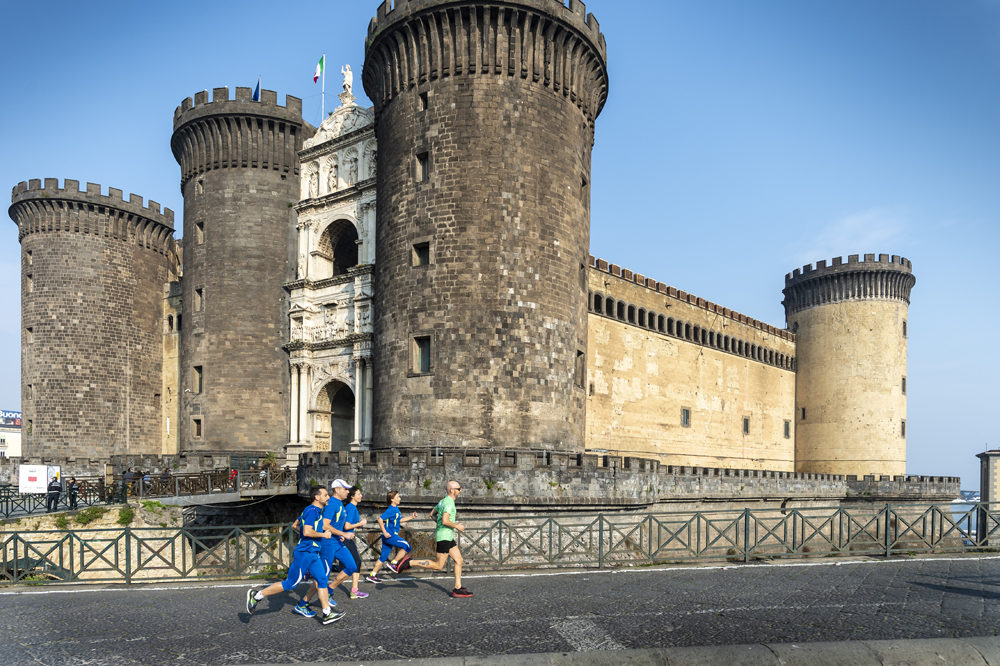 Majestic. Impressive. The first bastion of the Partenope siren for those who land on its shores. This is how Castel Nuovo appears. Known as the „Maschio Angioino“, to distinguish it from Castello di Capuana and Castel dell’Ovo, it was built during the reign of the Angioinis and it dominates the entire view of the bay of Naples. The castle is an imposing fortress with five towers, each of which have their own name: Torre di Mezzo, Torre di Guardia, Torre di San Giorgio, Torre di Beverello, and Torre dell’Oro. Its distinctive sign is the „Arco Trionfale“, which connects the first two towers, and is made of marble and adorned with rich decorations, reliefs and sculptures. To this today, Castel Nuovo plays an active part in Naples’ life, being the scene of cultural events and shows, as well as being the permanent seat of the Civic Museum, which has a visit itinerary that leads to many of its halls. The enormous librarian treasure of the Neapolitan Society of National History, founded in 1875, is also housed here. 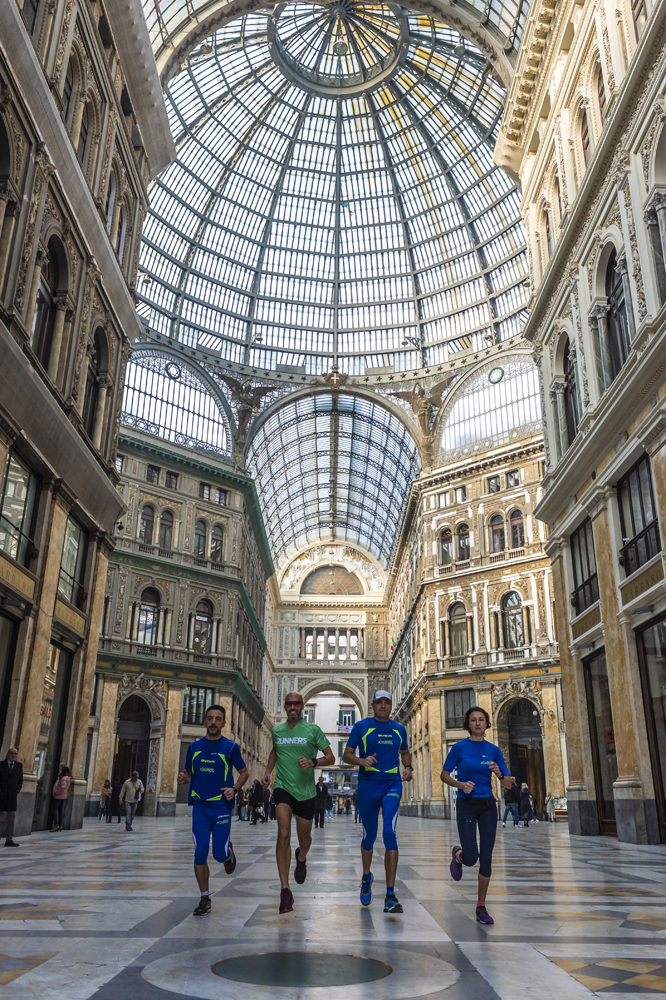 Galleria Umberto I, the most famous shopping gallery in Naples, was built between 1887 and 1890 (the same period during which the Eiffel Tower was built). For 50 years it was the reign of the „Sciuscià“, the shoe shine made famous by Vittorio De Sica’s movie. In the Neapolitan post-war period, the sciusciàs had their headquarters first in the Capodimonte woods, then in the Galleria. The chairs for the customers were real scarlet velvet trunks, five feet high. To have one’s shoes polished in the Galleria was a ritual, it was part of the habits of gentlemen, of middle class and of anyone who wished to parade about „glittering“. Choked by impossible rents and a dying tradition, the last two sciusciàs closed their business a few years ago. 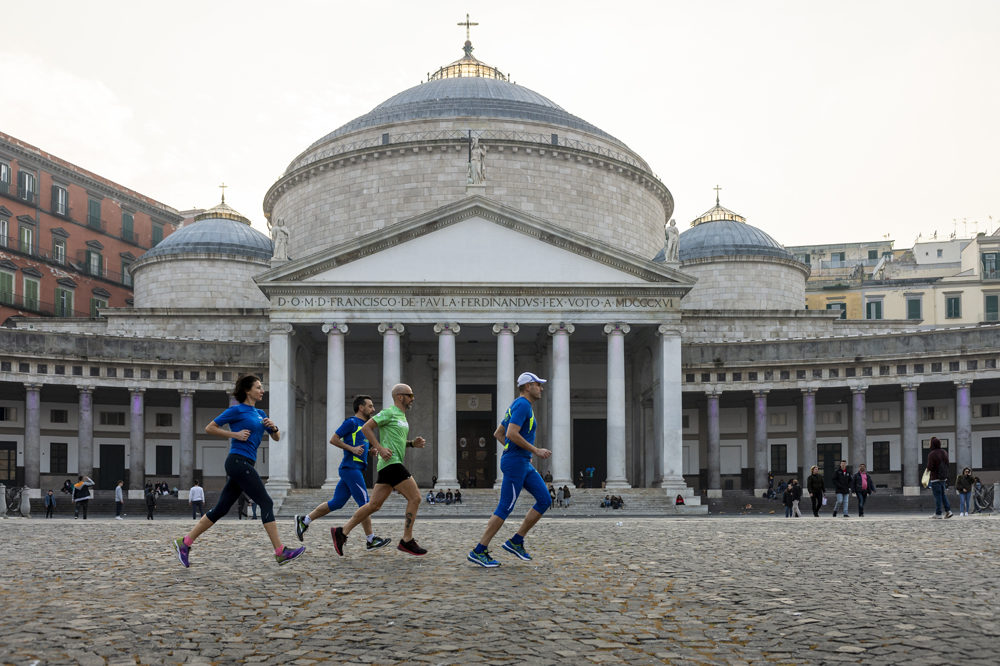 Piazza del Plebiscito is the symbol of Naples. Its name derives from the popular plebiscite with which Naples and the Kingdom of the Two Sicilies were united, in 1860, to Savoy’s Piedmont and the rest of Italy. Once a place of military ceremonies, today it is the stage in which important and artistic events are held – and also in which the Napoli City Half Marathon takes place. The square is bordered by architectural monuments of great beauty, including the neoclassical colonnade of the church of San Francesco di Paola and the Royal Palace. Between tourists and citizens, the game of trying to cross the square with eyes closed (170 meters in a straight line) is traditional, but practically no one has ever succeeded in the undertaking. Originally, in fact, the square had an irregular shape and even today a slight slope of the surface prevents those who decide to cross it from continuing straight ahead. According to legend, Queen Margherita (yes, the very one from which the pizza gets its name) pardoned the prisoners of the Kingdom if they had managed to pass this very difficult test, but no one ever succeeded due to a curse imposed by the same sovereign, a curse which still does not allow anyone to succeed. 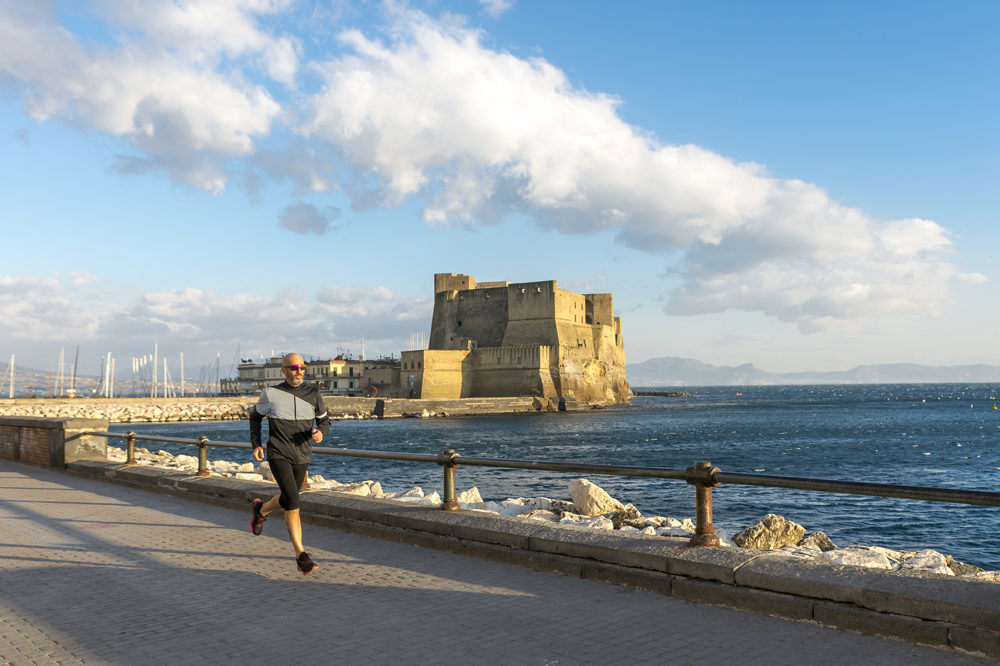 Castel dell’Ovo stands out majestically on the ancient Islet of Megaride, the first landing place for the Greeks who conquered the Gulf of Naples and founded Neapolis (the “new city”) in 474 a.c. . Numerous myths and legends tell of the island and its castle. One of the most bizarre one attributes the castle’s name to the egg that Virgil allegedly  kept hidden in a cage placed in its basements. The egg was guarded with heavy locks and kept secret because the good fortune of the castle depended on it. Other stories are related to the cult of the Partenope siren – the first who spoke of it was Homer in the Odyssey. The myth that Ulysses, tied to a ship pole, managed to resist the bewitching song of the sirens who wanted to enchant him. Because of the humiliation, all the sirens threw themselves from a cliff, killing themselves, and the body of Partenope reached as far as the islet of Megaride, thus giving its name to the nearby city. 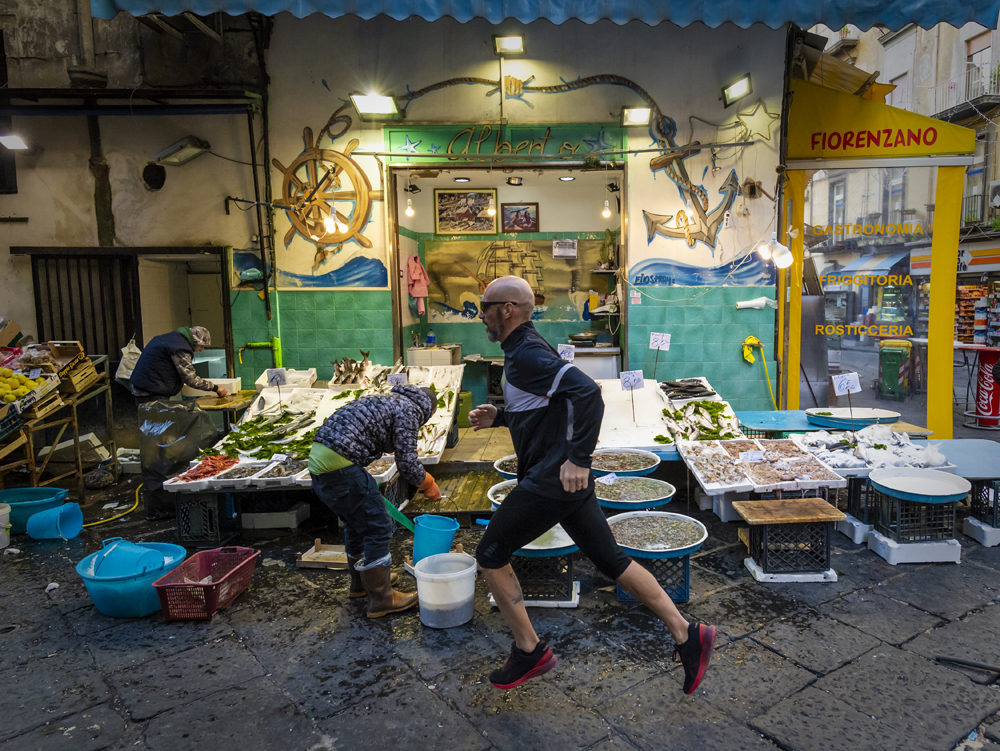 5 – Via Pignasecca and the Spanish District

Pignasecca is a characteristic area of the Spanish District, one where you can still smell the ancient flavor of the old market. It is a street where you can find every type of shop, from acquafresco artists to the shouting fishmongers. Before turning into the big outdoor market it is today, the district was occupied by religious complexes, noble palaces, and a huge estate then called „Biancomangiare“. Legend has it that in this place there was also a very large pine forest populated by numerous magpies, which were excommunicated by the bishop after they had discovered him in bed with the perpetual. After three days, the pine forest died, the pines dried up and the magpies disappeared, leaving only an expanse of arid and empty land – la Pignasecca. 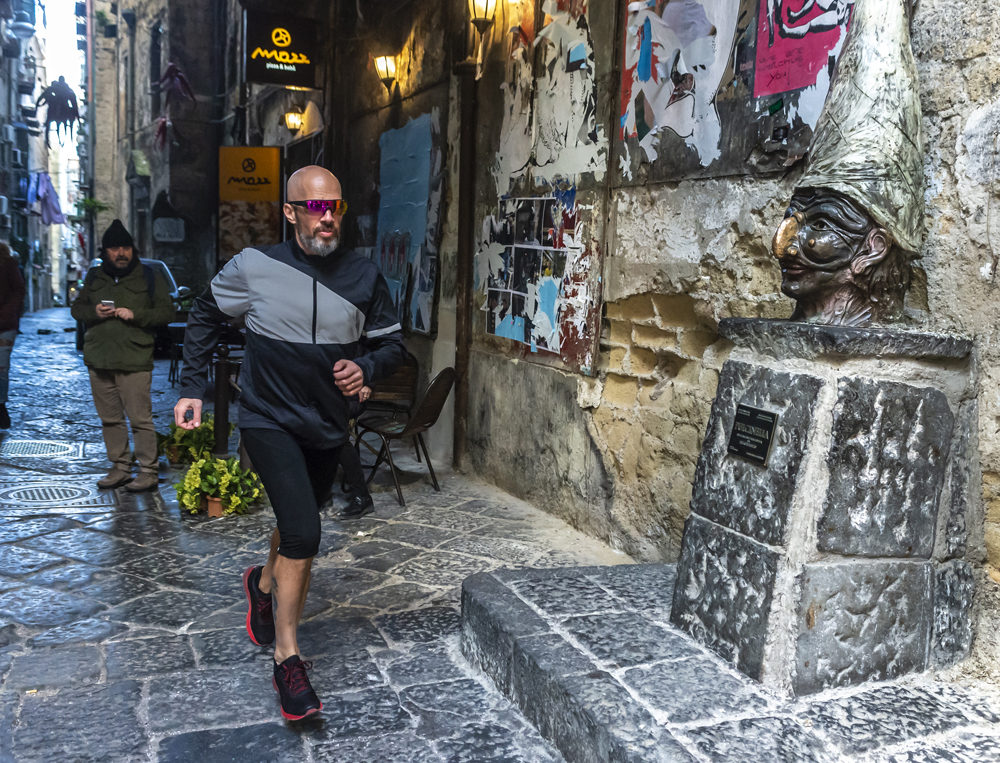 The beating heart of Neapolitanism. The road that bisects the historic center, marking a straight line that goes from the Spanish Quarters to the „Forcella“. Seen from above, from San Martino al Vomero, the combination of colors that characterizes it and which makes Naples one of the most colorful cities in Europe is striking. It has ancient origins. It is, in fact, one of the three decumans in which the Romans, basing themselves on Greek construction, organized the city. A stroll through  Spaccanapoli is a path (with obstacles) along the millennial history of the city and that contains all its essence. From the splendid artisans’ shops, to the hidden monuments that narrate their evolution, from the sellers who shout incessantly, to the chaos of people and motorbikes that fill it, from the bronze statue of Pulcinella to the altar dedicated to Maradona. 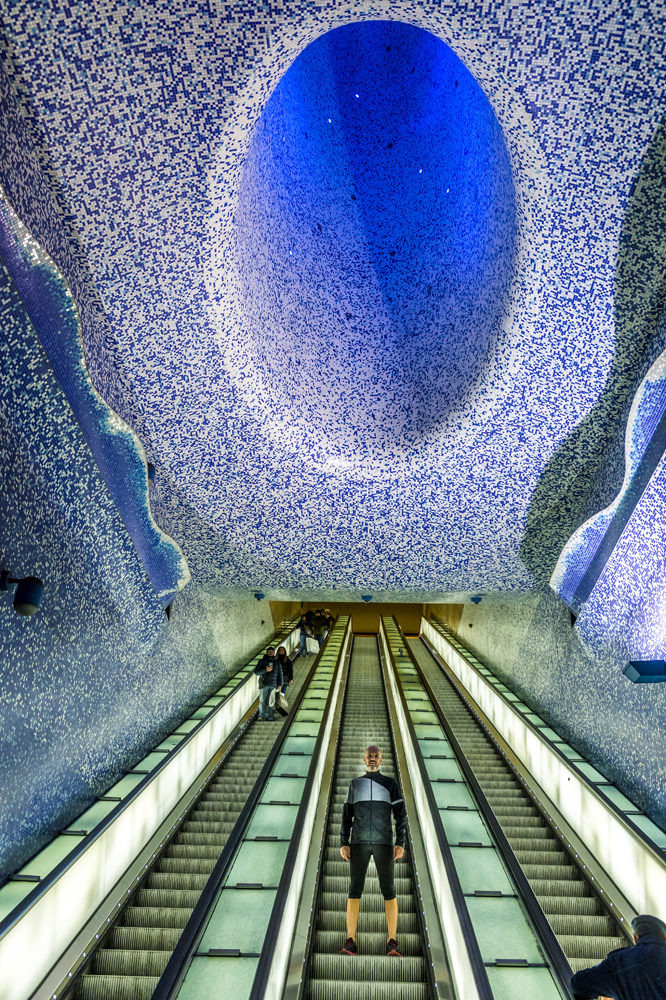 This is the most recent artwork of the entire Neapolitan city and one which has become a real tourist destination for anyone passing through Naples. We’re speaking, of course, of the Toledo station of the metro’s/subway’s Line 1, designed by Catalan architect, Oscar Tusquets Blanca, inaugurated in 2012 and defined by major newspapers around the world as „the most beautiful in Europe“. A spectacle for the eyes developed in shades of blue (sea), black (earth) and ocher (tufa) and that references the myths of the Mediterranean, the Vesuvius and Neapolitan iconography, with extraordinary mosaics dedicated to San Gennaro, a marine corridor and the suggestive „Crater de Luz“, a gigantic cone from which you can enjoy an unparalleled view of the city.

The Naples Duomo, or Cathedral of Santa Maria Assunta, is the main church of the city. Under the high altar, in the crypt interior, the bones of San Gennaro are still preserved to this day along with the two famous ampules containing the Saint’s blood. The rite of liquefaction, which involves the so-called „miracle of San Gennaro“, during which the archbishop of Naples shows the faithful the solidified blood contained in the ampoules „miraculously“ returned to a liquid state, is celebrated three times a year (on the Saturday before the first Sunday of May, on the 19th of September – San Gennaro’s celebration day – and on the 16th of December). This liquefaction phenomenon is considered a harbinger of misfortune in case it does not occur. In fact many remember that, before the terrible earthquake in 1980, San Gennaro’s blood did not liquefy… 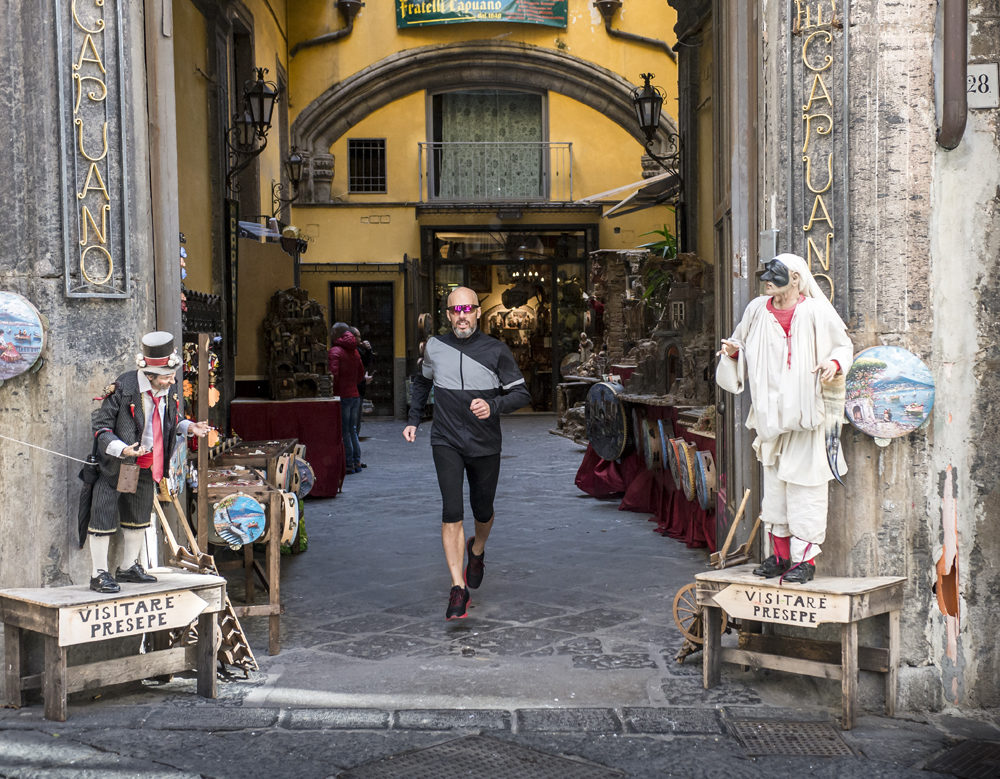 It is known as the „via dei presepi“, famous throughout the world for the countless craft shops dedicated to ‘nativity scene’ art. The neighborhood and its small shops, where one may observe the artisans at work and their creations, can be visited year-round. The main characteristic of the Neapolitan nativity scenes is that of being a perfect union between the sacred and the profane, given that it not only presents the classic statues of the Holy Family in different dimensions, shapes and forms, but also caricature representations of famous people from both the present and the past – and it is precisely in the creation of these statuettes that we find all the irony and imagination of Neapolitan artisans. 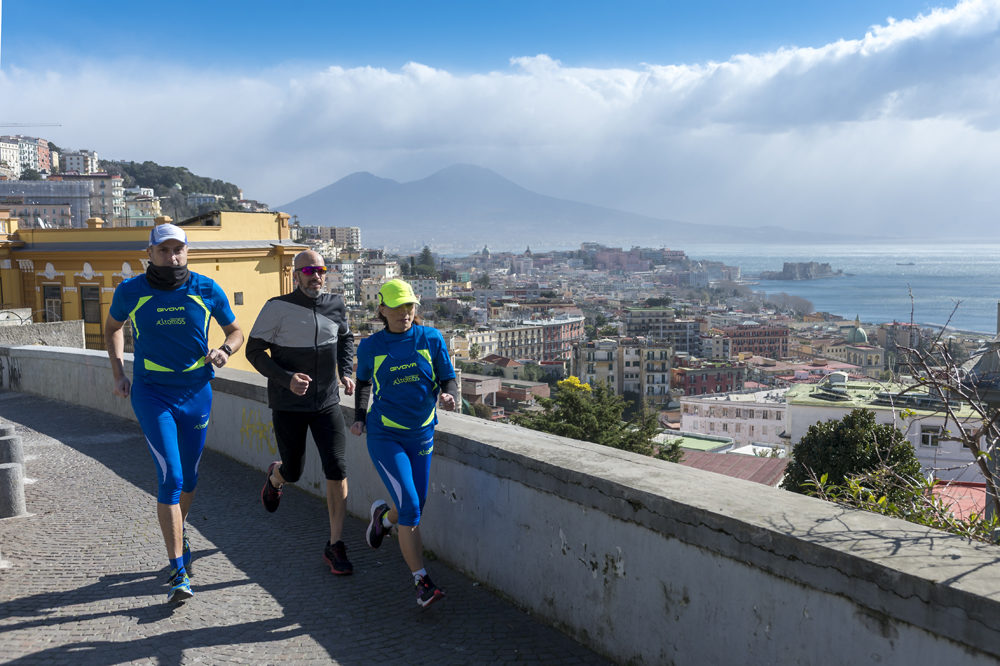 It is one of the main symbols of Naples, known historically for the eruption that in 79 AD destroyed the city of Pompeii. Among the many legends that concern it, the one of the Vesuvius Witch is tied to the 1958 eruption, after which the inhabitants of the Vesuvian countries began to hear chilling, female-sounding screams every night but without being able to understand where they came from. So they sought help from  a sorceress known as the „Vecchia ‘e Mattavona“, who launched several spells and eradicated the paranormal phenomenon. It is from this story that the American designer, Carl Barks, gave birth to the witch Amelia, a famous Disney character from the adventures of Uncle Scrooge.

An absolute must for all lovers of the true Neapolitan espresso, this historical place is located in Piazza Trieste & Trento, just a few meters from the better known Piazza del Plebiscito. Born in 1996 with more than forty years of experience in the sector handed down from father to son, the locale offers, in addition to the classic and creamy „Espresso del Professore“, 63 other variations of coffee. Particularly appreciated is the hazelnut coffee, a truly original creation born from the inventiveness of the famous owner, Raffaele Ferrieri, and of his children, as is the „Caffè del Nonno“, „Kinder Coffee“ or the „Caffè Cialdino“.

Based on the article written by Dario Marchini (Runner’s World Italia), Photo credit to Pierluigi Benini